Since the age of 14 I have been a T-Mobile user. Some people may dismiss their US coverage but with their recent, albeit late, roll out of 3G to numerous areas I have not had many problems with the actual service. In fact, staying in major metropolitan areas I have visited (Saint Louis, Chicago, Des Moines, New York) I have had service comparable to or better than my friends. But that is exactly where my accolades of the T-Mobile America end.

T-Mobile is overwhelmingly the number four cell phone provider in the United States and will be there for a while. This boils down to two huge problems and one more minor one. The first major problem facing them is their customer service.I currently use the HTC Touch Pro 2, a fancy smart phone. Every domestic carrier carries the phone but T-Mobile’s  model lacks two very nice features, a standard 3.5 mm headphone jack and Windows Mobile 6.5 over 6.1. The former I can live with, the later is inexcusable.

Not only was an upgrade to the new operating system offered months after it was available on other carriers, no employee of the company seemed to know that it was even available. Had I not looked on T-Mobile’s support website I doubt i would have ever found the upgrade. Them service problems I encountered may only exist in the five stores I visited. However, those stores are located in three cities and customer support also did not inform me of the upgrade.

More of my thoughts on T-Mobile can be read here. 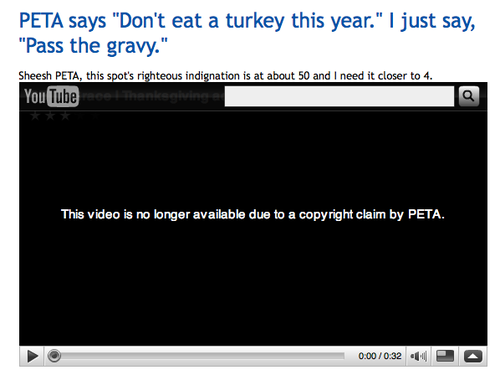 During thanksgiving PETA wanted to run their now widely known “Grace” commercial. It was not allowed on the airwaves but PETA posted it on their YouTube page, as did others. I stumbled upon a blog that had an embedded copy of the commercial posted by someone who was not PETA. When I went to click on the video I was met by the above message. This puzzled me. Clearly PETA wanted to get their message out, the whole point of going viral, yet only wanted people to view their copy. Wanting to monitor your content is still important but leaves a lingering question. 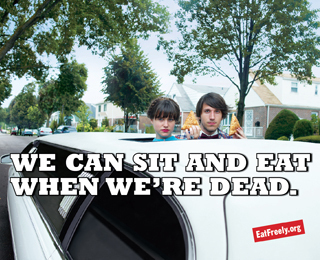 I love this tongue-in-cheek campaign from hot pockets. It may be a little too ironic for some audiences but i think it can attract the demographic they are targeting. The best gem from the commercials is “This is a bus not a dining room!” via EatFreely

Whatsoever you write, or paint, or play, or sing, or build, no one will strive to surpass or to slander you unless your work be stamped with the seal of genius.

From Theodore F. MacManus’ “The Penalty of Leadership”. The advertisement that solidified my interest in copywriting.

This is not a blog to lead a movement. It’s a way for me to air out my mind about the thousands of ads we encounter every day. My friends have gotten sick of my constant commentary about advertisement and to avoid social isolation i have decided to post my thoughts here. This is the way that I think and most importantly these ideas are who I am. I hope you enjoy my Copy Copy Blog.