The other night I was out at a bar talking to someone who is involved in the sketch/comedy/screenwriting scene (not a well known person, just a person). We were talking about the way we come up with ideas for our respective disciplines. Surprisingly, or not so surprisingly, the methods are similar even if the projects seem different on the surface. It's all about making it through the surface level shit to the stuff that's really inventive/surprising. The guy I was talking to filled up six legal pads trying to figure out the plot for his latest movie. Or so he told me.
He also told me a tip he'd received from a SNL/UCB writer when they were on a stand up show together. The tip stuck much better than the name of the person who said it. So sorry I can't attribute properly. What he was talking about pertains to how much people at the top of comedy writing push their ideas. This is what my writer friend said he was told by the SNL writer:

As he said this I could feel it being seared into my brain. Could feel myself nodding along in agreement. Even through the slight haze of a couple, couple of drinks* I knew this was good advice. It also says a lot about the benefit of being persistent.

I think that's an excellent way to think about making any creative work. It's so simple. It's so distilled down into the most basic thought. It's a statement of purpose among statements of purposes. It's also a good reminder that making anything good takes a lot of thought and a lot of leaps.

It's the same principle as coming up with a hundred tag lines or a hundred ideas. Luke Sullivan mentions this in 'Hey Whipple' and numerous other ad luminaries have said it too. John Cleese talks about this in his talk about creativity, too.The best way to find something unique is to keep digging. To fight the urge to step away when you find something halfway decent.

Pushing until you're on the edge of finding something divorced from the thing you're trying to say but still having it connect just enough. It's about exhausting the obvious. That's the sweet spot. 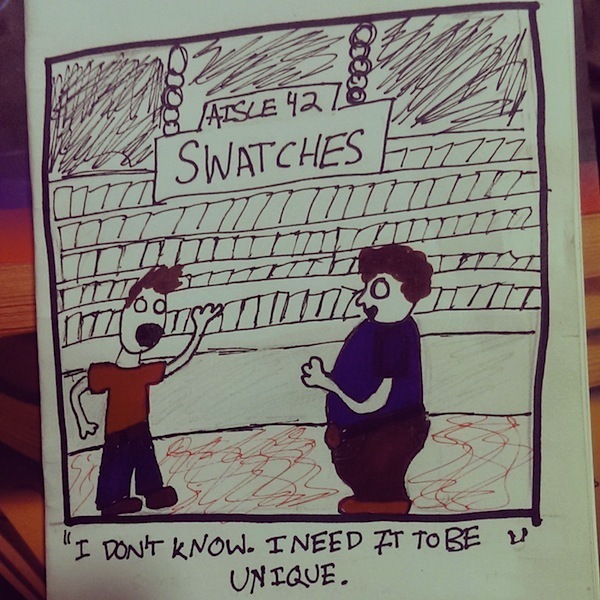 *Probably the reason I don't remember the name of the person quoted, just the quote.