I have serious digital consumption issues.

Chances are you do too.

At the time of this writing there are 22 tabs open on my work computer. 5 on my home computer (not to mention the 15 that are yet to be opened in a restore session tab). 735 "liked" videos on Vimeo. Over 200 on YouTube. Another 1,000 saved to favorites before that was phased out in favor of the Like.

At the time Google Reader shut down it informed me I had read over 17,000 articles since 2009.

Not to mention countless hours of to-be-listened-to podcasts. Hundreds of movies in my Netflix cue. A stack of books so intimidating I can't bear to look at it. And 36 combined hours of video marked "watch later" on Vimeo and Youtube.

This is the state of things. It is not good.

I used to believe that this endless consumption was a good thing. Valuable. It still is to a certain extent. But there is more information out there that I have liked and would like to visit again than I have time for. And more and more information comes rushing in every day. It's the virtual version of waterboarding. It's Huxley's nightmare realized. Numbness through self-selected stimuli.

And I am guilty of contributing to e-waste. I tweet a lot. Write here a lot (though sometimes not as often as I would like). Upload more pictures to Instagram than I ought to.

So what's the point? From a life perspective it's that the more you consume the more you want to consume. And eventually you become so bloated and full of shit that even the good stuff can't make it's way in. So the more you read the better filter you have to have. Because things can quickly go from enjoyable to overwhelming.

From an advertising perspective it's that you have to work so hard to do something good. Because everyone is in the scenario, maybe not as bad as me but still bad. They're distracted, overwhelmed, frantically trying to stuff their minds with more stuff. chances are unless you do something better than 90% of what's out there you don't have a chance. 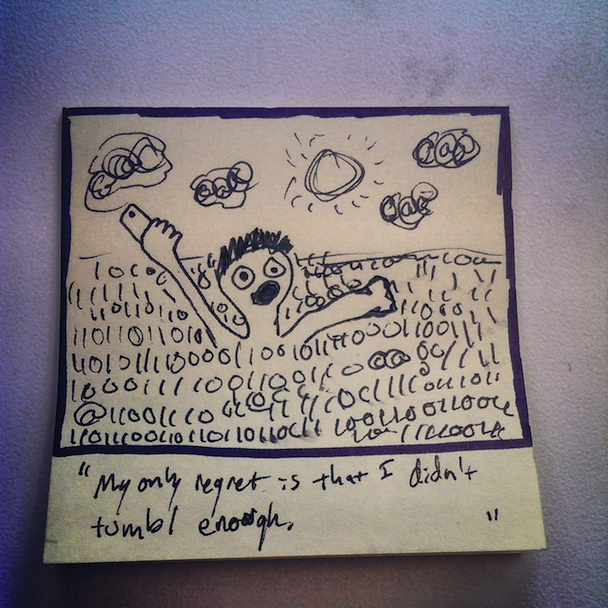