I'm standing on the patio of  villa, uh, somewhere. Wherever this is it's beautiful.

The patio looks out over a magnificent valley. It's enormous. The valley has cliffs jutting out all across the horizon. Like the whole thing was built into a giant earth bowl.

There's a lake, too. It's brilliant blue. Contrasting against the yellow, dusty cliffs. In the center of this lake is a small island. It looks tranquil. I don't have a clue how I got here.

There are other people too, that's certain, but I can't remember them. Who they are is completely unimportant. But they're here, enjoying the sights too. The villa is huge. More like a resort. Everything here is massive. I'm a speck of dust compared to the size of this place. But I feel, deep down in my fingertips, like I can control this place

So I descend the patio staircase down to the beach at the lake. But the lake has changed. It shifted around. Changing hues and water levels. And it continues to do so while I stand on the beach. Islands pop up and go away without disturbing the tranquility of the water. The surface of the lake doesn't move. It only changes when I look away for a second.

As I walk closer to the lake the feeling gets stronger. I do have control over this place.

I look down and there's a paintbrush in my hand. So I begin to pain, better than you can actually paint or have ever painted before.  With the flick of a brush a boulder appears in the middle of the water. Like Bob Ross but creating actual landscapes. A flick again, then another, then another, then another. Boulders are popping up everywhere.

This is fun. Like Harold and the purple crayon. I beckon the others to come down and make their own changes. One of your more boring people makes a comfy couch and TV. But I don't care.

I love this place.

A bunch of other stuff happens but its hazy and I can't remember what. Creation on this scale is exhausting. I feel as though I've  been walking around forever. Maybe it has been forever. There's no way to know. There aren't clocks or time or phones in this place. It's a nice change of pace.

By now the sunset has started. The lake is even more spectacular than before. It has become shallow. Very shallow. With light blue and pink water, like cotton candy, against sepia cliffs and sky. The main island in the middle has gone. Completely replaced by little islands that look like legs in a Dali painting.

That's all optical illusion. Everything, including the water is flat and painted. No hopping between islands needed.

My friends have vanished into the periphery but I notice I'm not alone. A man with a beard and southern accent is standing next to me. It's Wayne White! He's here creating too. This is his place of landscape creation. He's throwing giant words across the lake, they fill the valley.

I start flicking my hands to make large pieces of cherry pie, massive actually, fall out of the sky and embed themselves in the lake. Tossing them all over, having the time of my life.

With frantic flicks I lay down squares of cherry filling like modular carpet. Square after square after square. Wayne is laughing. His son stands beside him, sullen. He starts to explain something to his son but you can hear for some reason. You venture closer.

Wayne pulls out a map unfolds is, and does a pinching gesture on the surface of it like it's an iPad. As he does this I can feel myself get sucked up in the air.

In an instant the world disappears and we're floating in the fabric of the universe. Somehow I've replaced Wayne's son as his son. He's explaining is explaining the world to me. He has images of the valley, the world, and the universe in squares on the paper to show off the minuscule nature of our existence. (Yes, exactly like the opening scene of Cosmos.)

Then a tremendous clap of thunder woke me up. It felt profound. But maybe this is just an example of my ego feeding itself. Either way, it was a pretty phenomenal dream. 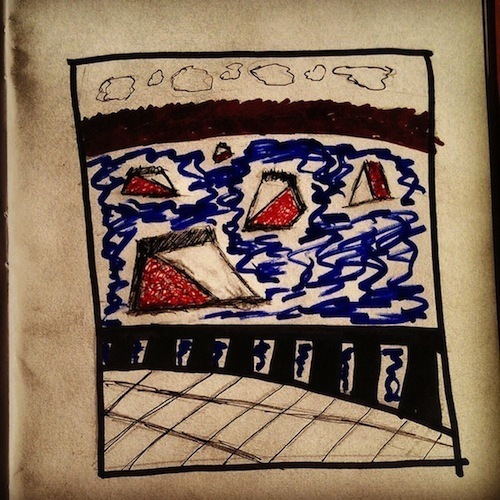 (I should really consider taking an art class some time.)