(This started to a comment on Sell! Sell!'s blog post of the same title but quickly spun into something much longer)

Years ago I found myself sitting in a bar talking to my friend's dad. He asked me what I wanted to do with my life and I enthusiastically replied, "Advertising!"

He sneered at me, not out of hate but out of concern (god I hope it was concern), and replied, "What's the point? If people like Coke they'll drink Coke. Pepsi, Pepsi. Why do those companies need to spend millions of dollars not convincing me to drink the thing I don't want to drink?"

Now maybe it was my unbridled enthusiasm for advertising or, more likely, it was the unbridled stupidity that can only be brought on by drinking a copious amount in the daytime. Either way, the comment made me launch into an impassioned speech about advertising. We're talking major pontification, quoting statistics, citing great ads of the past.

I explained that even the largest companies need to advertise simply to keep their market share even (as seen with the failed Pepsi Refresh campaign). I explained that for companies that large you did not need to be extremely creative, you just had to show up. That's why they spent so much money.

I also explained that advertising was best for giving a smaller company an edge over one that can outspend them. That these littler companies stood no chance in the marketplace without raising awareness of their product. Even if that product was IBC Root Beer it still needed to show people what it offered that differentiated it from the Cokes and Pepsis of the world. That creativity was the only unfair advantage a company that is not the market leader can possess.

Now I can't tell you if this convinced him one lick. But it embodied and still embodies the way I think of advertising. The point of advertising is to give a company an edge over their competitors in the mind of people on the street. There are myriad ways to do this, and an equal number of objectives a certain company can have with their advertising, but if the advertising isn't trying to accomplish this it is sunk before it gets beamed around the world.

This is not a revolutionary notion. I'm probably stealing liberally from the people I learned advertising from (Bill Bernbach, George Lois, Mary Wells, Dave Trott and later the Ally, McCabe, Gossage schools) but I think those are pretty solid people to steal from. The reason their advertisements worked, and might even work today if shown next to most modern advertising, is that what they sought was a way to entice an audience in a way no one was else was. They were not slaves to style or fashion. They, to steal from advertising again, thought different.

So what's the point of advertising? It's to give clients an unfair advantage through creative thinking. That's all it's ever been. We just choose to complicate it. 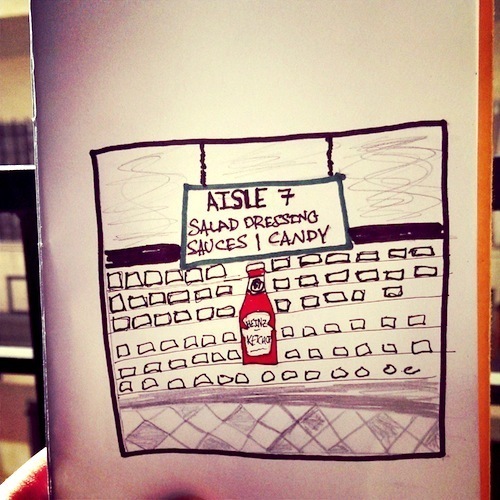