While you were out:

SOME DUDE LEFT A MESSAGE

FOUR COPS ARE WAITING IN YOUR OFFICE TO SEE YOU NOW. NO, YOU CANNOT TAKE ANOTHER LUNCH. FACE THE CONSEQUENCES OF YOUR ACTIONS.


Music video shot, effected, and edited for $200. Decent song, too.

Where do glass repair guys get their glass from?

It's not like they're making it in the shop.

"Oh hello, Mrs. Hutchinson. Your front door you say. Now do you know the measurements? Okay. Okay. Well In think of our kiln guys start working on it now we can get it to you by weeks end. That's good? Very good. Goodbye."

No. That doesn't happen.

So that means there must be a U-Line type catalog where glass guys go for their glass. They get on the phone, order the panels from somewhere else, then install them.

And if that catalog exists that must mean that somewhere, maybe multiple somewheres, there is a giant warehouse filled with glass panes and molten glass.

Think about that the next time you go around neighborhoods breaking windows, you rascals. 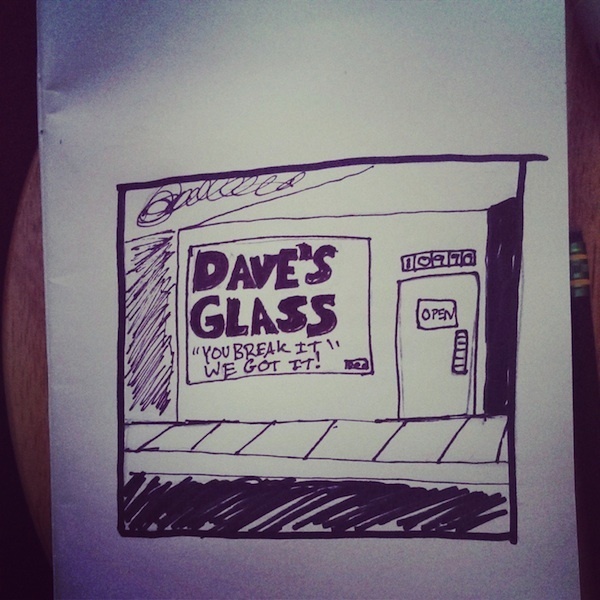 "Content" usually has the mental nutritional value of sawdust or cabbage soup. It doesn't do anything for anyone but exists because people say it must. There are good examples of content but there's also just so much bad stuff out there. And it's done not because it needs to exist but out of a sense of obligation.

I really hope what Thom Yorke says is true and it all swings back in the other direction. Somehow I don't think there's a big enough cork to stuff into the content bottle.

(Riffing off of Scamp's "Are 'Content Marketers' Smoking Crack?")

Excellent ad for the Sunday Times. (via Ben Kay)

Nice short film about the nature of love and soul mates. Done by an agency!

Also from Ben Kay. Brilliant talk about the nature of "writing" jokes or anything, really.

The entire soundtrack from "Her" if that's of any interest to you.
There's just so much I love about this video. In it Kaufman talks about writing movies, the nature of writers, his "process", his fears, his definitions of success and failure. It's great because you can't help but think about your own work while you're watching it. Messy things like the place of art in advertising and he nature of selling things while connecting with people.
I will note there are a few times the video is a little rough when language barriers present themselves. It's still a great way to spend an hour (if you have one of those to spare).
(via)

Wow. I've seen a lot of satire and this one is just spot on. It's delivered completely straight-faced. the longing shot of the two friends towards the end (how is it that he convinced his friend to quit, exactly?).

It even makes you think about the nature of authority figures using the University's president. Brilliant. Someone get these people  a job at The Onion.

What's that? It's earnest? Sigh. I thought we had the next Joseph Campbell on our hands. The search continues.

Today is my last day as at The Escape Pod.

Not in the office, mind you. I moved out to LA a little while ago and they kept me around to finish up a few things. Another example of the support they've given me since I started work there as an intern in 2011. I want to thank them for that and for everything else.

At the risk of sounding cheesy, The Escape Pod gave me a great gift. They took a chance on me when I had nothing except ambition and enthusiasm (and this blog and a few scraps of creative work I'm now embarrassed to look at). Then they took a chance again when they let me shoot my first commercial three months out of school. Then again on projects most young writers wouldn't be trusted with. They seemed to believe in me more than I did at times.

That's feels very special and is the experience every young person in advertising deserves. I can't imagine starting my career anywhere else.

The Escape Pod spoils you with opportunity. I've said this to people before because it's true. There's no choice than to learn things quickly. To refine your thinking. Due to this the responsibilities thrust upon you are amazing. The lessons you learn from Vinny are as valuable as any paycheck. And the agency lunches were nothing to scoff at.

If you know someone looking to start off their career, or you are someone looking for a great agency in Chicago you should email The Escape Pod. (Just do it with a bit of intelligence, please.)

Thanks again to everyone there who made it a special place to work. 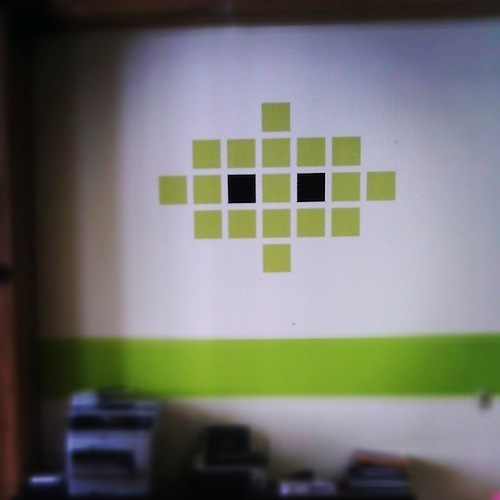 Not sure how I missed all the news about this upcoming Terry Gilliam project, but I couldn't be happier. Bummer the trailer is only low res but that only make the impending release of the movie more exciting.
New Terry Gilliam!

Here's something that's been nagging at my for the past month or so. Actually, it's been longer but it used to be less of a nag and more of a quibble. But now it's made it to full blown nag status and it is time to take a stand. Which is what I'm doing here, now.

This all flared up again when I was watching the season premiere of Community.It should come as no surprise that I was thrilled for the fifth season. So thrilled I decided to watch the show live. That's right, on television with advertisements and all. Now I realize you, working in marketing and owning multiple devices with which to never encounter a single unwanted advertisement, may not be familiar with this scenario. What happens when you watch TV live is that there are these breaks where P&G and KFC and BP run advertisements during the show. That's what recoups much of the expense of making a television show. That's what we, the advertisers make.

But as I watched the first two episodes of Community get interrupted again and again I was very disheartened. Not that these interruptions existed. Lord no. I love that someone is paying so I can watch this wonderful show. Rather, it was because while the show is so tight, so sharply written, so funny, so wonderfully produced, the ads are anything but.

This is not to say the ads were bad (okay, a few were but this isn't a the place to bring that up). They were simply dull, or not all that funny, or not all that good, especially when placed next to a show that is none of those things. And in that moment it made sense to me why people say they hate ads. Most of it just isn't as good as the stuff it's interrupting.

Now I can't imagine people set out to made ads like that, or ads that are more boring than the magazine they're running in, or ads that are more boring than being stuck in traffic. Imagine that! There just has to be something broken because ad people, for some reason, don't seem to feel the need to write up to the material we're being shown against.

I use "write up" as a general term here to mean make an ad that matches or surpasses the quality of the media it's being presented with. This isn't a new thought. I read it time and time again when I was obsessively trying to break into advertising. But it's been forgotten or cast aside. This should be the number one goal of agencies because without it there's no way for a client's message to get noticed, at least in my mind. Am I crazy to think that being as good or better than the thing you're interrupting is important?

This doesn't even get into digital projects. I love the internet. I have since the day I realized it offered me access to anything I could want to read, watch, listen to, see, or learn about. It is an endless pool of amazing things. Which makes the challenge of advertising online even more difficult because we're competing against everything for attention.

However, despite claims that the internet has "changed everything" it has not changed the fundamental need to steal people's attention, to be interesting in our advertising. If anything it is made it even more important. Before we sell we must get attention and that's getting harder and harder by the day. Funny, as this happens there seem to be more awards and congratulations than actual jealousy-inducing campaigns.

The best agencies already do this. Or try to do this. And it won't always work but, for me at least, it seems like we should be writing up to the material, yes entire internet included, rather than writing down because that's what we're asked to do.

Very few people ever ask their agencies to do something that will get noticed. Something that will beat the programs. So this is a hard sell. A very hard sell. But to me it's worth it because I'm sick and tired of watching TV and being embarrassed to work in an industry that thinks so little of the people watching/reading/viewing that it produces billions of bytes of wallpaper. 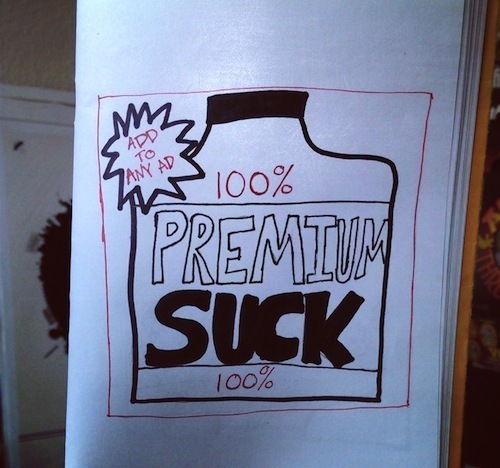 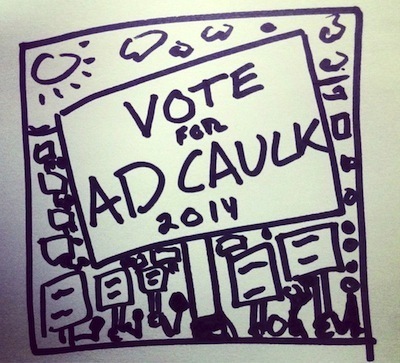 Every year around this time, I evaluate what's going on here. What I like about the last year of blogging and what I don't. I want to start off this newest year with an apology.

Apology for turing this into some preachy advice-blog that it was never supposed to be. I never liked the idea, or notion that this was, or has been just an advice blog. That feels cheap. Trite. Because there are people far better and more experienced than me to dole out advice. It was, perhaps, naive to start a blog offering advice. It should be about stories, thoughts, little things that made me laugh. About life as it relates to advertising. If you take something away from that, that's great.

If not, well, sorry.

This does not discount any or all of what I wrote before. Some of it I truly love and love to re-read when I need to remember how fiery I could be. The anger in some of these posts is still palpable. It just doesn't feel right to be offering advice when I'm still trying to figure things out.

This change will certainly a shift in what I hope is a positive direction. It's more freeing, if anything. More exciting because blogs can be about anything. They should be about anything. It's only when we carve out these little fiefdoms that we worry about being off brand. Or doling out advice day after day because that's "what people have come to expect".

So thank you everyone (anyone?) who has stuck with me though these four years of blogging. I'm amazed it's lasted this long. Hopefully it'll be even better in the year to come.

And here's to a better, brighter, less banal year of blogging!