When I was a freshman in high school I was bonkers about my youth group chapter.

I have often said that it was the closest thing to a fraternity that can be found at that age.

Every week the 24 of us would meet in a room just to talk about the plans we had for the following week/month/semester.

It was chaotic, it was loud, but it was more fun than anything else I had ever done.

How things got accomplished I will never know.

But my chapter was good.

We knew it but didn't care to brag.

Unlike other chapters we kept to ourselves.

We didn't really take part in chapter cheers or proclaim our greatness while thumping our chests.

But we knew what we did and how we did it was something special.

So that year we entered for numerous awards, including chapter of the year.

Most chapters would submit a page or two listing accomplishments that they have had over the past year.

Attendance numbers, membership numbers, how much money they had raised.

But that wasn't us, we wanted to do something different to show why we were deserving.

Two of the upperclassmen in the chapter took it upon themselves to write a nine page document detailing the moments that made our chapter great.

They told stories and allowed a peek into our chapter. Something no other chapter managed to do.

And we won the award.

We won it because we cared more about the process, the moments that made us great, than about achieving greatness.

And in the process of winning this award we changed the criteria for what makes a chapter deserving.

Instead of falling back on old habits other chapters elevated themselves to strive for something more.

The effects of the single award entry are still present among the teens today.

This relates to yesterday's excellent post from Makin Ads: Your Competition.

You may be the most talented person at your school.

But remember those people are not your only competition.

It is easy to think an idea is great.

To fall back on the same trick time and time again.

Because it works, because it lets you show off your ability without breaking a sweat.

But that only gets you so far.

And more than likely there is someone out there outworking you, because they want it more.

Leave a piece of you on the paper, just like my youth group chapter did.

This is Jake Dub's blog from his tenure at the VCU Brandcenter.

His blog is dead.Don't laugh. Never again will he post another picture or write another word.He's done because the blog had one purpose, follow his experience through the Brandcenter.Jake's blog is a step above those of most other Brandcenter students. Every week he would post a quote from an advertiser or celebrity and explain how it pertains to his life.He talks about what inspires him, ads that he digs and content that means something. There's no 'my cat did the cutest thing last night' posts. Everything has a reason behind it. And his demeanor is so laidback letting his personality and passion come through.I'm a big sucker for the way he signed every post 'dubs. out', it's just cool.His blog kicked my ass. I realized I was competing against VCU students when applying for jobs or internships.And Brandcenter students do awesome work. 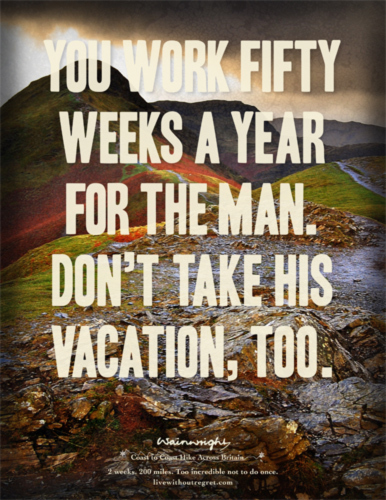 Work that is inspiring for the future of advertising.

The hard work from two years of rigorous advertising study shows in their books.

Copywriter grad from 09 Tristian Smith wrote the Google "parisian love" commercial at the super-bowl.Just sayin.Above all Jake's blog made me want to elevate my work to that level. I hope he decides not to take down this blog because I know it inspired me. If you take the time to read it it will inspire you too.*This ad is the work of Jake Dubs, Copywriter at 72 and Sunnny. Make sure you check out his personal site. The writing on the first page is brilliant.

My blog is now on posterous. It's easier to use and a better platform for me.

Also I'm going to stop signing posts. It's sort of pretentious to assume people reading my blog need to be reminded that I am the sole contributor. On occasion I may sign really heartfelt pieces. I hope to post more often with real content, not just awesome videos I find. There are a few pieces in the works right now, so be on the lookout for those.Lastly, my posts will now be posted automaticly to twitter so you don't have to keep clicking the refresh button waiting for new content. As always leave a comment or email me with anything you want to see. Thanks!

Make sure to pop in headphones before you give it a listen/view.

I find the attention to detail in this video really cool. The way the actors mimic the kickback of the guns makes it all the more lifelike.

This is the link from the post I took down.

It is a good idea to think about how to work with account people, rather than work against them. It will make the job easier for you to understand their brief, and for them to sell your ideas to the client.

I just took down my last post due to the lack of depth of thought behind it. I will revise this with a new post sometime in the near future. Sorry if any of you enjoyed it, it just didn’t meet my standards.

I can’t believe I didn’t post this back when I found it in April. I meant to, just forgot.

Anyway this is a video from Mother and Stella Artois about the dying art of painted advertisements. I’m a huge sucker for good instrumental music, good story lines and tight shots done with DSLR cameras; needless to say this was right in the center of my ‘like’ zone. Sorry this is posted so late, most people have probably seen it by now.

Also of note: Today is the 5th month since this blog was started. Feel free to email me and say what you like, don’t like, or would enjoy seeing more of.

This may be the blog I am most excited to share with you. On the same token it is by far the most daunting.

A few weeks ago Seth Godin wrote a post about gifts. The basic premise was that there is a difference between a gift and a present. A present costs money but it is merely a pleasantry. With a  gift you are really giving a part of yourself, it affects both “the giver and the recipient.”

In this sense I feel that Dave’s blog is a gift. A gift to advertisers everywhere and, more importantly, to developing copywriters.

From the moment I found Dave’s blog I was transfixed. I read through 26 pages of archives the first day I found it. Every time a new post comes up in my RSS feeder I drop everything to read it.

His insights have changed the way I think about the craft of advertising. The way I argue. And, to some extent, the way I look at the world.

You may also notice that I have adopted some of his writing style in a few of my posts. I just think it’s an awesome way to get across ideas. Writing line by line helps provide clarity.

Do yourself a favor and set aside a good chunk of time to spend reading Dave’s blog. You won’t regret it.

Keeps with my theme of successful people trying harder.

If you don’t know who Droga is, you can read something about him here.